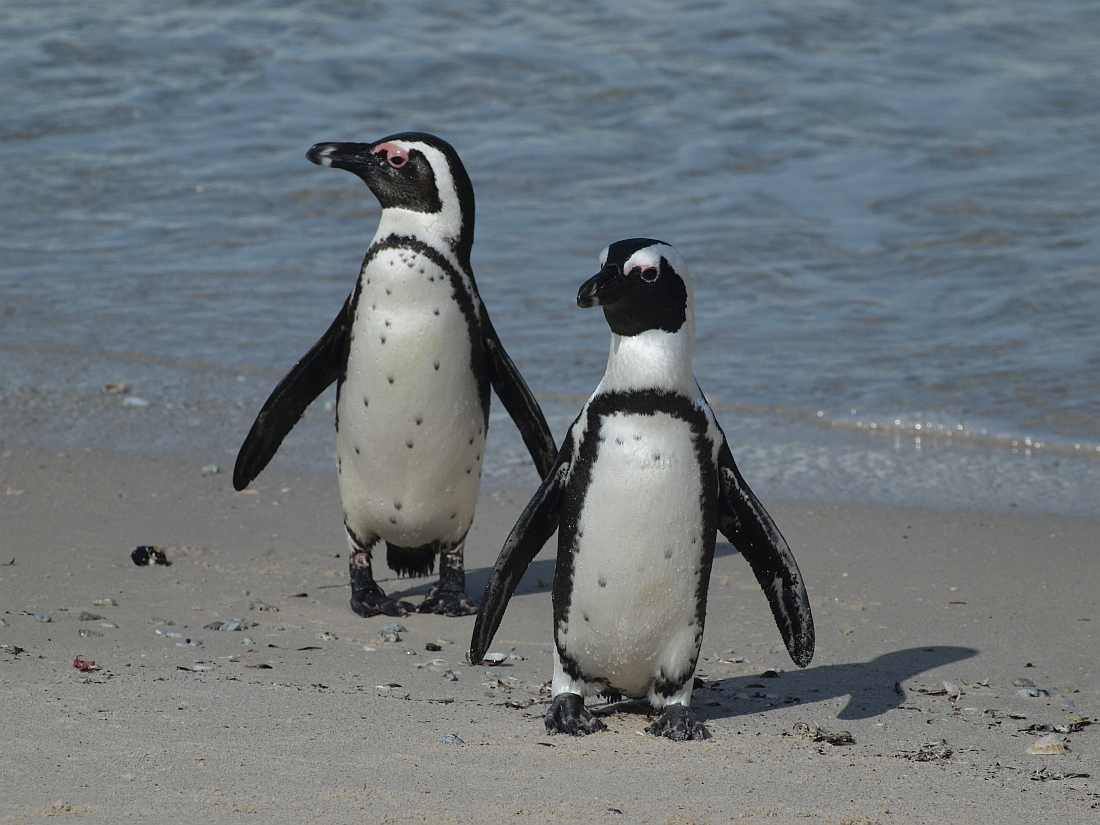 In order to commemorate this, I had recently combined two of my passions, penguins and soaping, in one of the episodes “The merry mishaps of soaping Superbini”. Make World Penguin Day a happy Soapy World Penguin Day!

In our German soapinist forum we had a little contest „African themed soaps“. While most of the other members thought of landscapes with elephants, giraffes etc, I immediately remembered our South African holiday from a few years ago and our stay in Simonstad in the Boulders Beach Lodge.

For me it was clear – my Africa inspired soap would have to be a penguin soap. Nevertheless, I tried to use oils and fats which were Africa related. I already had quite a good stock of oils which were more or less from African origin. Well, at least the trees from which those are harvested grow in Africa, too. The most challenging thing was to get ostrich fat.  Luckily, we have quite a few ostrich farms in Germany, so I ordered a bag of vacuumized ostrich fat from one of them.

Let the fun begin… This was my inspiration – penguins on the beach in front of muddy coloured water:

It all started with preparing a light coloured Rooibostea, which should be the basis of my lye solution. I couloured it with drops of blue and grey soap colour in order to achieve the colour of the sea.

My intention was to do the soap in a so called “dividor”. This is a rectangular shaped mould with separating strips of acrylic glass in it. I got mine second hand from a lady in the soaper’s forum.

Originally it is from a German company called Lumbinigarden – they have plenty of soap moulds and beautiful shaping / cutting tools and do soap stamps, too (this was an unpaid advertising, by the way 🙂

I made a soap batter from ostrich fat, coconut oil, cocoa butter and rice bran oil. It took quite some time for the batter to get solid. That was necessary because I wanted to roll it like cookie dough between two pieces of clingwrap and the cut out pieces for the beach part of the soap and the penguins.

Done so, I powdered the beach parts in very fine sand bough from a pet store. I placed them in the mould, sandy side down, and arranged the penguins on top.

The second part of the soap, the “water part” consisted of the aforementioned blue-grey-coloured Rooibos-lye solution and a mix of ostrich fat again. Combined with mango butter, macadamia nut oil and babassu oil. I had nothing to imitate the overwhelming scent of real penguins and seasalt, so I replaced it with a few drops of essential nutmeg oil.

Once I started pouring the “water” part of the soap, things started going not as it was planned. The white penguin and beach parts of the arrangement wrought havoc and started floating.

So here I was – holding a beaker with liquid soap and trying to press down the floating parts in the mould. As I am no octopus, I have only two hands, and the whole rescue operation finally turned out unfruitful.

After unmoulding, I had four pieces with a brownish layer of soap covering the penguin-beach-parts. Brown, because of course the Rooibos had turned brown and there was nothing left of the blue-grey-watercolour.

Not possessing a wire cutter, I decided to use a sharp-like-hell ceramic vegetable slicer to scrape down the brown layer. Unfortunately, the sand grains clustered and caused dents when the cutter tore them through the still soft soap dough.

Accepting defeat is something every beginning soaper has to cope with.

I punched out some soap dough for the eyes and used broken heads of sugar flamingo sprinkles for the beaks:

The last one is my secret favourite – I called her Leni. Leni Riefenstahl. Sorry, the joke is only funny in German – “Riefe” is the German word for scratch. And this soap has a real big one which could not be polished away. And “Stahl” means steel. So this young lady had to have an eye from a silver cake sprinkle, making it look like steel.

I feel like I have still made the best of it. The soaps smell great. I have made a first try of washing my hands with the shavings of the soap (made by the sharp-as-hell veggies cutter). It leaves the skin soft and smooth. What else do we make our soaps for? Beauty is always in the eye of the beholder!

Happy Soapy World Penguin Day to alle Penguin lovers all over the world!