Pour soap kisses on me! 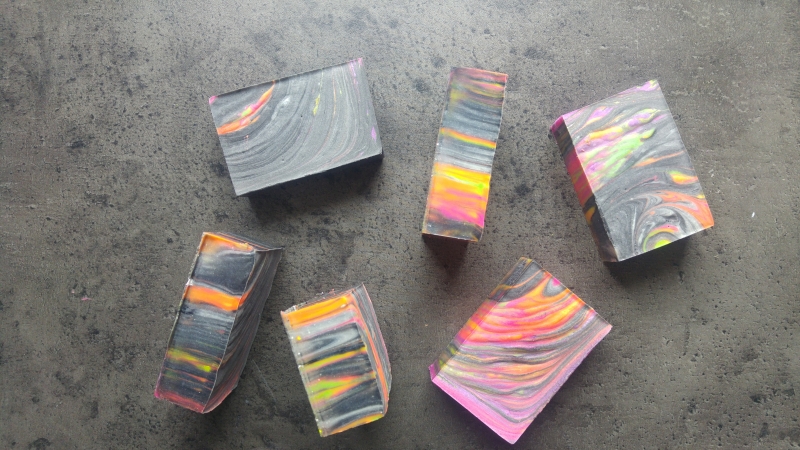 The kiss pour technique is actually quite self explanatory. No, it’s not intended you hold the pitcher with the soap batter in one hand and kiss your partner / your children / your pet at the same time. Its secret is two or more portions of soap batter, coloured in different hues, poured from two different pitchers in a steady stream, meeting each other up in the air and forming a feathery pattern once they hit the mould.

It’s the only moment I can think of something hitting the ground forms something beautiful – think about eggs, a bottle of red wine (or two) or a glass of pickles. No feathering, just swearing.

The challenge in the challenge was to create a recipe which would stay fluid long enough until you have coloured all the different portions of soap batter in the separate containers. Then combine them in the two pouring pitchers (if you were an octopus, you could have used eight pitchers, I guess) and finally pouring them into the mould. Preferably without having blobby glops or gloppy blobs splattering down and ruining the pattern.

As usual, I was late and also somehow uninspired. I did a first attempt right on Valentine’s Day. I chose a recipe with palm kernel oil (30%), palm oil (30%), olive oil (20%), rice bran oil (10%), cocoa butter (5%) and castor oil (5%). I wanted to create something colourful hitting a black-and-white on the other side, because I felt like these days are like that. As it was Feb 14th, and it was a Kiss Pour, I chose “Love Potion” from Gracefruit to be the perfectly matching scent. (And I knew that this fragrance would neither discolour nor accelerate the trace – clever girl, am I not?) This is what happens if you try to clean the little blade from your vegetable chopper, erroneously assuming that a latex glove is cut-proof  #donttrythisathome Ladies (are there Gentlemen amonst us?)  meet “The Darkness devouring the light” Intimidated by the numerous other beautiful kiss pour soaps appearing all over the social media, I decided to give it another go without titanium dioxide speckles and more subtle colourings. I chose to divide the batter in 5 portions, two should go in one container, coloured in fuchsia and buttercup yellow, and the other three were a fried egg like pattern of light silver grey, dark grey and pastel pink (“aphrodite” mica from UMakeitup).

The recipe was one I already had used to make a thin line pour for my niece’s 20th birthday last year. Sunflower oil, palm kernel oil, peanut oil, palm oil, coconut oil and castor oil (35/15/15/15/5) would do the trick. Scented in Coastal Rain from Brambleberry it looked nice when it was in the mould. Unmoulded, the first thing I wanted to do was to put it straight to the bin. The colours had somehow gelled away – no more sign of bright fuchsia pink or buttercup yellow. But sometimes you just have to dig deeper to find gold (or cat droppings). Fortunately, I had made the soap thick enough to be able to merrily plane away until some colour reappeared: and finally I found the mummy and the fire-breathing squid: I still have some more hours left to decide, which one goes in which category – experienced and bonus are the options.

And I have some more hours to do market research for a decent, affordable soap planer.

Previous PostWhat the h*** is “Duschbutter”?