Brighter than a thousand suns… 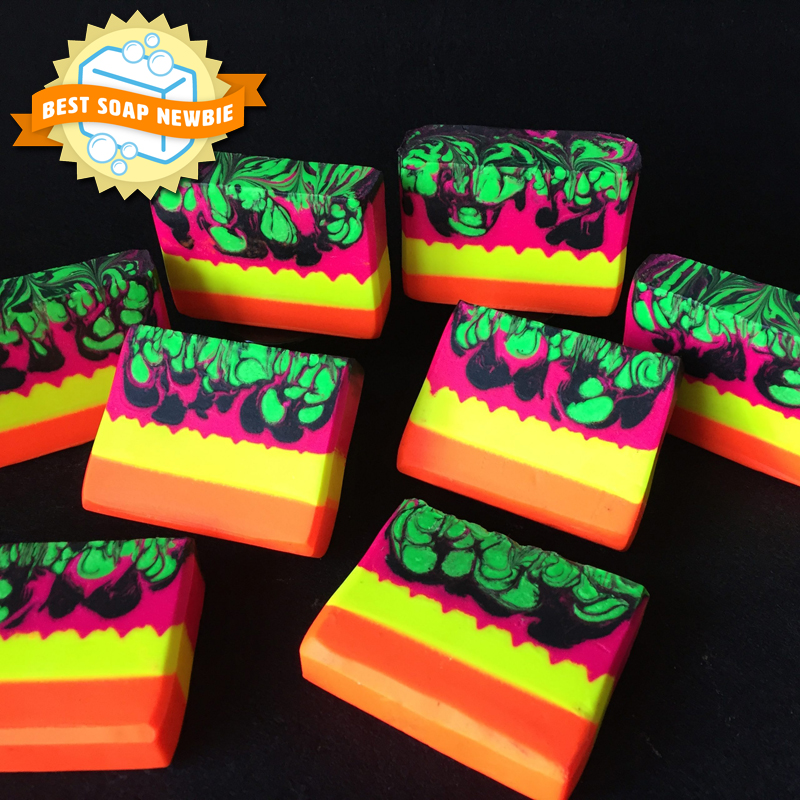 You might remember the last time I made soap for the Soapchallenge Club – then in June it was the One Pot Wonder.

I missed the one I actually wanted to do – river rocks and marbles. An acute feline health emergency  distracted me from focussing on something unimportant like soapmaking. At least it seemed totally unimportant to me in that moment. But now, as our furry family member is feeling much better, spirits were up again and ready to get creative.

If you search the internet, you will come up with loooooads of pictures of all kind of layered soaps. Just the same happens if you search for dropswirls in soap. The task our lovely SSC host Amy asked us to fulfil was combining both techniques.

Like before, there was one beginner category, where beginners with less than 50 batches of soap or less than one year of soaping experience would be allowed to enter. And one advanced category for all the rest.

Too good to be true!

That is, only if you qualify as a beginner and your soap complies to the rules of the beginners’ category. Because if the soap is a beginner’s oeuvre, but contains elements those would automatically push it to the advanced category. Easy, huh?

As I was lacking enough time to do several attempts like last time, I decided to put all my eggs in one basket and make it a one try wonder. I had recently purchased a small loaf mould from a lady who regrettably had to give up soaping herself.

It is a loaf mould, reasonably sized (18 x 6,5 x 7 cm), it has a silicone liner and a wooden box with a lid. It holds about 800 ml of soap – it was perfect for my purpose. No more sectioning a way too big loaf mold with cardbord box thingys.

I needed a recipe… Amy had provided us with a recipe suggestion. I liked it, but it contained beef tallow. Beef tallow seems to be around only in winter time, when birds are fed with it. So no beef tallow. Recipe tweaking was the motto.

The original recipe was the following:

and this is what I made from it: I thought, goose instead of beef should be alright as well, and I had found goose fat in a local supermarket recently and wanted to give it a try.

The whole layers and dropswirl thing required a plan. Some kind of architectural layout. I was planning to do 3 layers, each in a different colour, and then there had to be the droppings (it’s more linear droplets than swirls, so the term dropswirls is a trifle misleading). Two differently coloured lines of droppings would do.

So I had a loaf mould with round about 850 ml of capacity. I needed three batches of differently coloured soap for the layers, and I needed two more small amounts of even more differently coloured soap batter for the droppings. And here it the snag – maths and me never got along well.  Never. I speak seven languages, learn another one at the moment, but numbers and me? Go away and nobody will get hurt. Visualising helps. Even if it looks really stupid – it helps! I did not want to mix the oils and the lye first and then split it into batches, no, I wanted to split oils and lye and add it in small containers, then add the respective colours and the scents (I used Jelly Beans Frangrance Oil  to add a scent that matches the bright colours). Thus I would  have full control about when the batter starts to accelerate and not getting under pressure because of funny things happening in my mixing containers. Especially when the colours I chose were screaming This was the palette I had to choose from. The pigments are from a German company called Manske. I guess a lot of soaping ingredients vendors have them, but I like the idea of supporting local business. Their prices are good and the service is reliable (this was unpaid advertising, by the way 🙂 ). A lot of soapmakers have a critical opinion about the neon colours, because they contain polyurethane. My fellow soapmaker Eva Gomez has recently been in touch with a leading seller of micas and pigments in the UK about this topic. People using neon colours are not as bad as it seems.

Back to our challenging task of splitting, mixing, pouring, waiting, sculpting, waiting again…

I poured the first layer – the orange one – as bottom layer and let it sit for about 30 minutes until it got solid. Preparing the next layer in the small mixing pot in the meantime (I used a milk frother to do so. We have on where you can take of the mixing thing and put it into the dishwasher. So my partner’s cocoa would not have a taste of soap the next morning…) and let it sit not as long as the orange one, because I wanted to give this layer a little sculpting. I had bought a jagged buttercream sculpting plastic tool at TEDI – similar like the 1 Dollar stores in the US, and cut it to fit into the mould: Unfortunately, I am still no octopus, and this is why I have no pictures of the sculpting process of the yellow layer. It was about midnight on a Saturday evening, and the man of the house, who would otherwise had acted as photographer, was fast asleep on the sofa. No reason to stay awake when Soaping Superbini disappears in the black hole called kitchen and plays with chemicals.

Neither there are pictures of the dropping of the swirls. Or the swirling of the drops. Whatever. I think, the mysterious and funny thing about this technique is that you cannot ever say what is the outcome. You simply drizzle the soap batter into the filled mould from a certain height. Gravity will decide how the finished soap will look like in the end.

Next thing I remember

is the unmoulding. Out of the dark: I had put the mould with the still not solid soap in the oven for the night. It seems like my hands have been shaking with either fear or excitement – well, the batter had piled up on one end of the mould. Mishap again. But then, in the tutorial video, Amy, too, dropped her finished soap, so I feel in good company 🙂

Following some more pictures just to show off 🙂 This is the end.. The first cut is the deepest: (does Rod Stewart really wear a Celtics jersey??) Brighter than a thousand suns: I must say – I am very very please with the result. It makes my pupils constrict, and I do not need all these fancy night lights anymore because my soap leads me the way through my apartment. My only hope is that the colour will not come off and stay on the skin once I (or anybody else) washes with it.

6 thoughts on “Brighter than a thousand suns…”